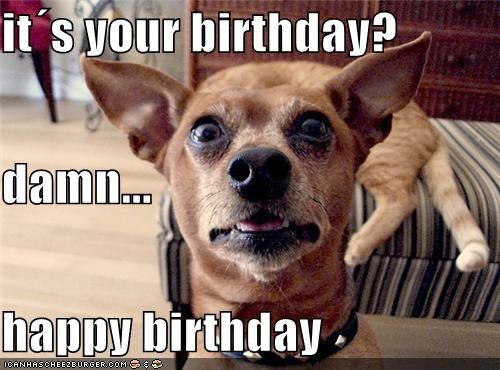 So…it’s my birthday. I’m 20 years old. I wish I could say that the age of 20 is significant in some way. Sadly, it’s not

Really, it’s just taunting me because I’m so damn close to a birthday that actually matters (21st, duh). And to top it off, it’s Friday the 13th *gasp*

Nonetheless, this is the day I was birthed to the universe, so I suppose that’s kind of important. It’s actually very important…probably the most important day in my life. Considering it’s the day my life began…

As I sit here and sip my coffee *sip sip*, I’m contemplating the years of my life and what each one meant. How was each year of my existence significant? An interesting inquiry

At age 0 (yes, I know there really can’t be an age 0, but I’m not gonna refer to myself as 5 minutes old) I was born. I began my life as a human on this planet. I knew nothing, I said nothing, I could do nothing, and I don’t even remember anything. I was, by all accounts, a blob. However, this was the start of my journey, and that’s important.

Age 1: not a whole lot changed from age 0 except that I probably had some hair on my head. I still couldn’t talk, couldn’t walk, and couldn’t feed myself baby goop. The only thing that was different was that I could make incoherent noises that somehow translated to “I want food” or “Pick me up right now dammit!!” Only slightly advanced in my blob-like state.

Age 2: Ahh yes. A fine year. Words began to form. I read my first novel. The Great Gatsby by F. Scott Fitzgerald. My life was never the same.

Age 3: A breakthrough. I started to walk. My increased mobility lead to the immediate downfall of my foes…of which there were many…I also gained the ability to shovel baby goop into my mouth. Independence was close.

Age 4: I discovered cartoons. All brainpower was lost. I had to relearn how to walk and talk. It was a struggle, but I’m a stronger man because of it.

Age 5: Tied my shoelaces by myself. Nothing could stop me now. Sadly, I began to question the existence of Santa Claus. I could trust nothing and no one.

Age 6: The myth of Santa was debunked. I knew it all along. I also heard my Dad say the “f-word” for the first time. I dedicated all my time and resources to discovering the meaning of this extraordinary word. Also, apparently girls carried a fatal virus. “Cooties” they called it.

Age 7: First fist fight. I kicked the kid in the nuts, knelt down, and whispered in his ear, “Suck it.” Also started to grow a mustache. I was an early bloomer.

Age 8: I discovered the meaning of the “f-word.” It took over my vocabulary like the plague swept Europe. The mustache continued to thicken. I thought it was cool, but really it looked like I fell upper-lip first into a pile of dust

Ages 9-15: It’s all a massive blur. I began to hit what is known in the human world as “puberty.” I’m not sure how it happened, or what exactly occurred, but all I can tell you is that I was in a fragile state. Some would call it shell-shock, others manic-depression, and others sheer terror. Any way you cut it, it wasn’t pretty

Age 16: Of course, I started driving. I avoided all major accidents until I backed my Jeep into herd of cattle…that didn’t actually happen, but you thought it did for a second. Gotcha…

Age 17: The first time I ask myself the question, “What does it all mean?” The jury’s still out. Also smoked my first cigarette. Contrary to what my middle-school teachers told me, I didn’t shrivel up like a salted slug. Lies everywhere…

Age 18: Off to college I go. I discovered that people suck. I learned the art of “Not giving a (insert expletive)”. I also learned that coffee is as valuable is oxygen…perhaps more valuable…

Age 19: I started writing and I was like, “Hey, this is pretty neat.” Then I started this blog and, well, here we are. I’ve been blogging the world by storm ever since. Then, “Gimme the Loot” by Notorious B.I.G. became my favorite song, and I knew that all hope was lost.

Age 20: I CONQUERED THE WORLD. BOW DOWN, IT’S MY DAMN BIRTHDAY

4 thoughts on “Hey, it’s my birthday”