Yes indeedy, the New Year well under way. Time to forget the mistakes and mishaps of 2013 and start anew.

New Years is generally a jolly ol’ time. That is, if you don’t spend the next day vomiting up the tums you took to settle your hangover-plagued belly and feeling like you’re recovering from a tussle with Mike Tyson. But generally, it’s fun. You get together with old friends, reminisce, and cause a benevolent ruckus.

However, as I sit here and sip my lemon tea *sip sip*, I’m wondering how the New Year’s tradition got started. How did this massive celebration ever come to be? Why did it come to be? Why do we find it appropriate to parade about like mad-people in celebration of this day?

These are interesting questions if you think about them. Especially when you consider the reasons that we shouldn’t celebrate the New Year.

Why shouldn’t we celebrate? Well, I’m glad you asked.

I don’t wana get old. I like being young and doing all the young things that I do. Now, I’m not one of those “I hate every new day because I’m only moving closer to my death” kinds of people, but I’m still not a fan of the aging process. I certainly don’t like things that jump out and say, “Hey!! Time’s whipping by and you don’t have a damn clue!”

When it boils down to it, that’s basically what New Years is. A giant, flashy reminder that the years are flying by faster than a frightened pterodactyl.

I don’t want my younger years to be over with. I know, they aren’t over yet. I’m enjoying the hell out them so far. But that’s precisely why I don’t want to be reminded that the end of these years is a lot closer than I think. It kind of, ya know, sucks. 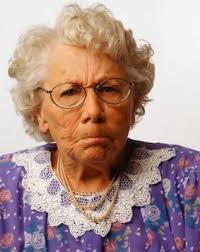 “Getting old sucks a big one…”

See, she gets it.

New Years is a celebration of the passage of time. And – according to the scientists in my basement laboratory – the passage of time means getting older. Therefore, we’re celebrating the slow transformation into old, wrinkly, bingo-playing, early bird special eating, 8:00 p.m. bed-dwelling creatures. Whether or not you like that is up to you.

Ahh yes, the swaths of folks who want to lose weight, spend less money, spend more time with their families, and quit puffing on cancer sticks.

I have nothing against a good New Year’s resolution. Self-improvement is, well, self-improvement. I don’t think anyone’s gonna tell you that you shouldn’t cut out the extra three donuts a day on top of an extra-large non-diet Pepsi chased by a nice, refreshing Marlboro. I could be wrong, but somehow I don’t think so.

According to Forbes Magazine, roughly 40% of the U.S. population formulated some sort of New Year’s resolution last year. The U.S. population is about 313,933,954 humans according to census.gov. That means that approximately 125,573,581 people partake in this tradition of life-changingness. That’s quite the crowd.

Being the hard-working, driven, tenacious Americanos that we are, we probably have a pretty good success rate with these resolutions. We’re from good ol’ ‘Merica, where Olympic gold medals are more common than a cold and the only thing stopping us from total world domination is the amount of McDonald’s we eat. So, with our culture of success, we should be pretty good at this New Year’s resolution stuff. Right?

Only 8% of people who embark on resolution journeys achieve their goals. And that means – prepare yourself for this outrageous arithmetic – that 92% percent of resolution participants fail to complete their New Year’s quest.

That’s a ridonkulous failure rate. You can probably gather that from the statistics that I and my basement scientists have provided, but here’s an expertly crafted bar-graph to help illustrate my point.

As you can see, New Years is a holiday steeped in failure. Loads of people end their New Year’s resolutions with teary eyeballs and, yet again, donuts in hands. It’s sad, but true.

We celebrate a holiday that leads to frustration and discouragement for kajillions of poor souls. No, we don’t directly commemorate these downfalls, but we sure welcome with wide-open, inebriated arms the day that ushers in these botched attempts.

As much as it may sound like it, I’m no Near Years curmudgeon. I enjoy the partays that New Years brings. I still took part in the strangely motivated celebration. I like to have a good time, after all.

I’m just doing my duty as an ever-vigilant, always observational human being. I’m not accepting things for face-value. I’m looking under the surface. I’m not being a brainwashed, zombified glob of humanoid-jello.

Just some sustenance for thought.

Regardless of your feelings towards the New Year, I hope yours is grand.

May 2014 bring riches and a bunch cool stuff that you don’t necessarily need but would like to have.

This post was inspired by Bitter Ben and his blog of bitterness, Ben’s Bitter Blog