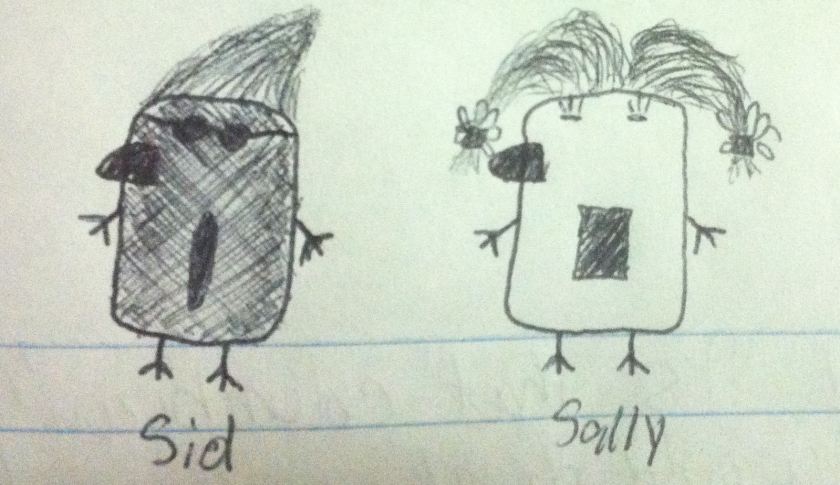 I think it is in collaboration that the nature of art is revealed. -Steve Lacy

You should know something before I dive into this post; I have a strange obsession with drawing the little bird-things that you see above. Whenever I’m bored in class, I bust out a pen, and sketch a one of them. Until recently, I’ve only done the guy bird (the one with pointy hair and sunglasses), but I created a girl bird, too. It’s a way for me to let my creative juices flow…

Actually, these are the only things I can draw that don’t look like poo, so I draw them to feel like I’m good at art.

I was in my digital media class yesterday. I sit next to the same girl every class, and she sees me sketch the guy bird all the time. At the start of class, I sketched the little guy bird (his name is Sid) and the little girl bird (her name is Sally). I slid my notebook over to my friend to show her my new girl-bird creation. She smiled, laughed, and drew some flowers in Sally’s hair. I have to admit, it was a nice touch.

Class went on. My professor talked about this and that. We started watching some video of some guy talking about some digital stuff (I wasn’t paying attention).

Then, something popped into my head:

Thinking that I was pretty crafty, I slid my notebook back to my friend to show her what I’d done. She read it, gave me a little grin, and chuckled.

But then she did something I wasn’t expecting; she grabbed the pen from my hand and started writing underneath what I just wrote. She slid me my notebook with a sly smile, and I read what she added:

Sally was too sassy, with makeup on her eyes. Sally didn’t like Sid, she liked older bird-guys.

From that point on, class was abandoned. I grabbed the notebook and started adding onto what she had written. When I was done, she took the notebook back and added something of her own. This went on for about ten minutes until we created an entire story for Sid and Sally.

To give you the complete effect, here’s the story in the notebook of which I speak. 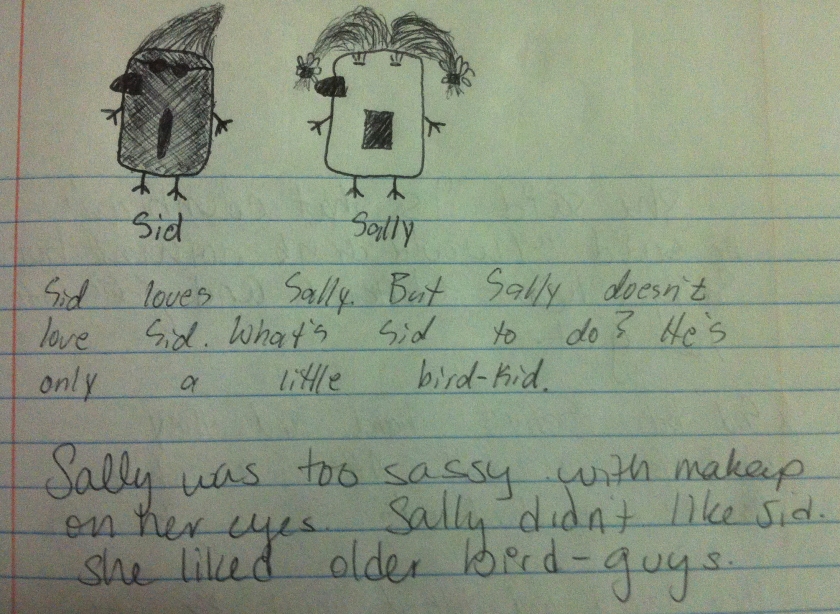 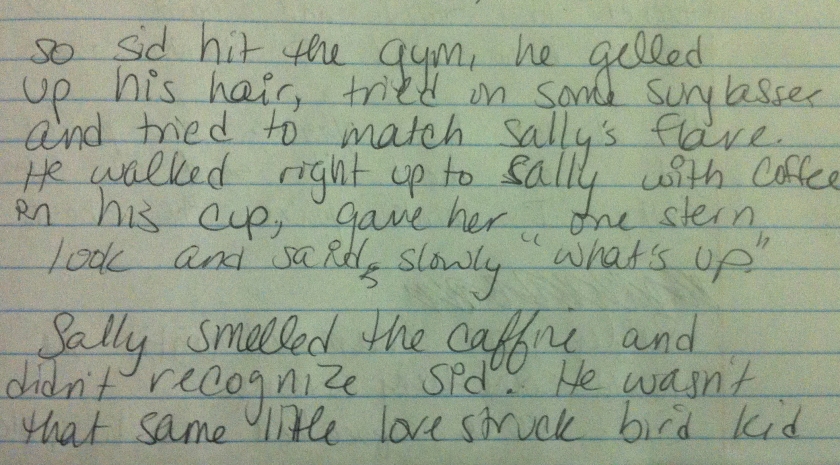 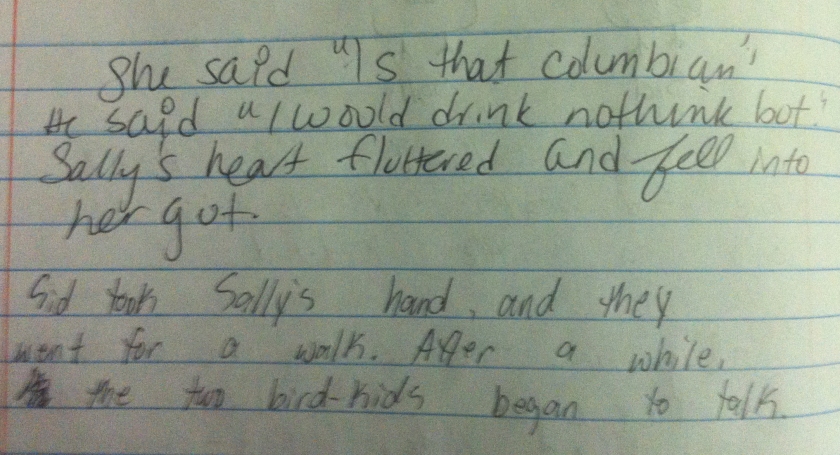 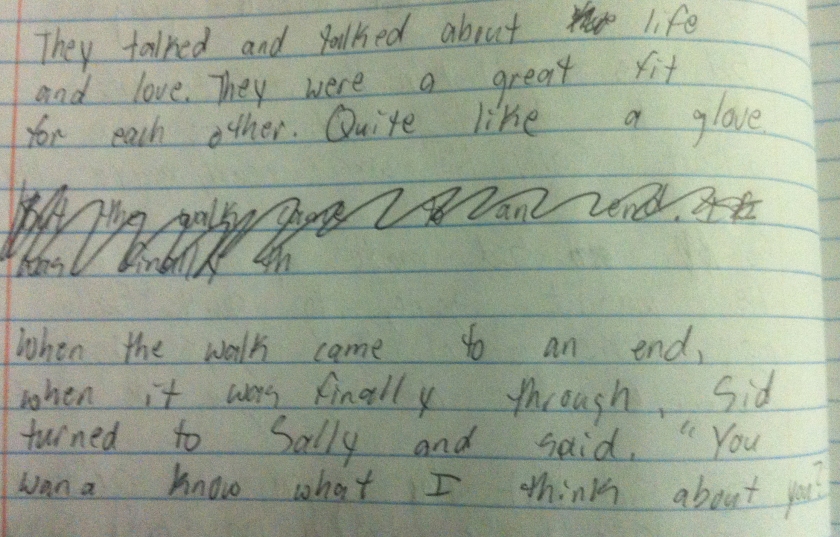 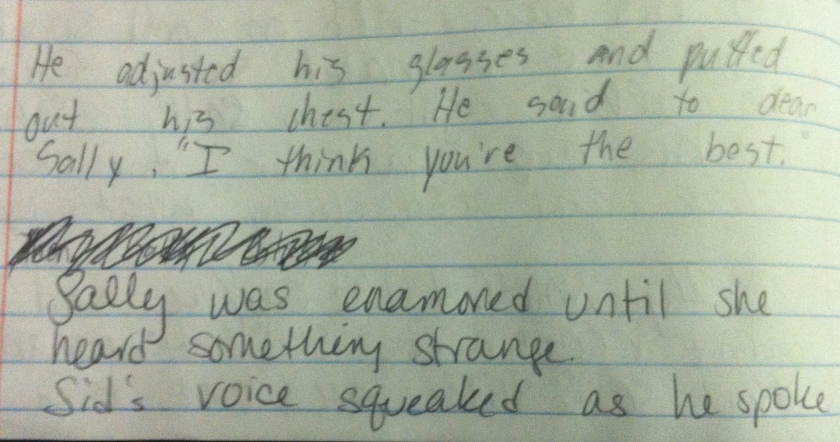 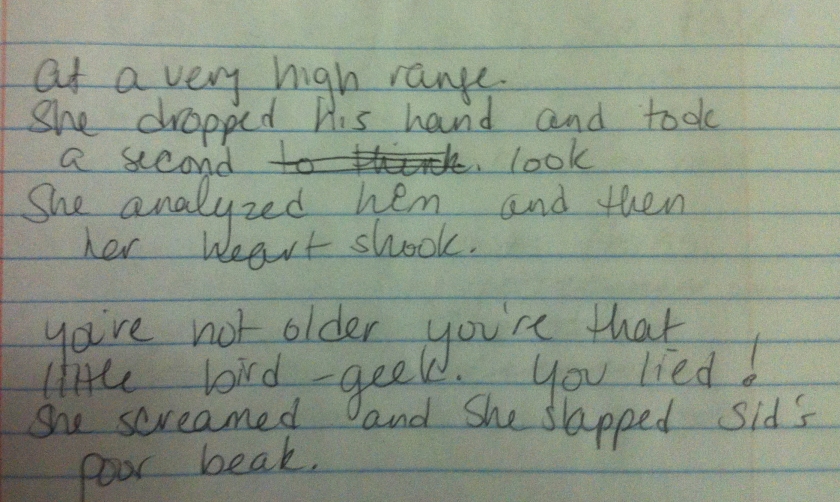 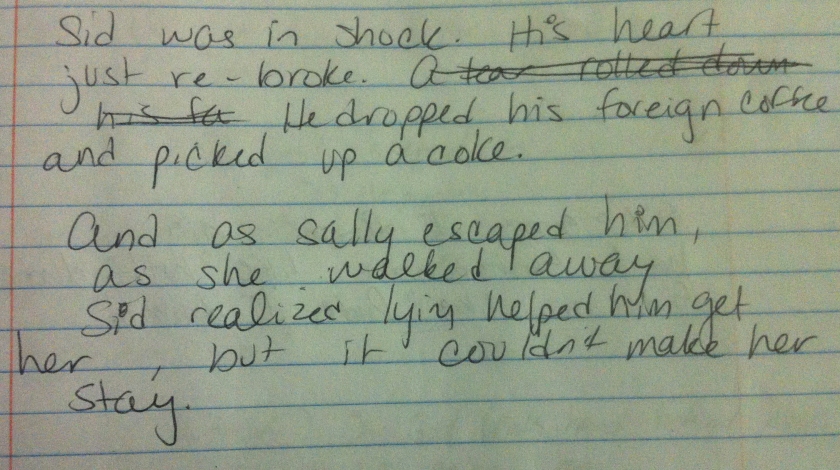 I’ve written a lot of stuff. Like, way, way more than I can even imagine. But I’ve never written a story with someone else. Even though it was a tad silly, it was one of the coolest things I’ve ever done. The story went in a direction that I never would have taken it. We put both of our brains together to make a story that neither one of us would have created on our own.

It was kind of incredible to see what was in someone else’s head. I’ve never known a thought process besides my own, and I’ve definitely never tried to incorporate someone else’s thoughts into my writing. It’s kind of impossible considering that I only have one brain. There’s no way for me to see someone else’s ideas unless they write them down. I guess that’s the beauty of collaboration.

Any thoughts on working together to make something super cool? Perhaps a comment or two about our little comic? As always, I’d love to hear.

2 thoughts on “The Beauty of Collaboration”