“There are plenty of fish in the sea.”

You’ve heard it before. Whether it was said to you or you heard someone say it to someone else, this phrase has passed through your ears more than a few times. Maybe you got dumped and your best bro told you, “It’s all good, brother. There are plenty of fish in the sea.” That’s a comforting idea. That the person you’ve lost is replaceable. That there are other people, lots of them, waiting to be “caught.” That all you have to do is go fishing and your sorrows could be alleviated.

I was pondering this phrase the other day, and I’m wondering if it really holds as much weight as people give it credit for. Is it true? Are there really plenty of fish in the sea? Should this make us feel better if we’ve been dumped or left or what have you?

I hate to be that guy, but I’m going to try to answer a question with a question. Instead of asking if there really are plenty of fish in the sea, I think the more appropriate question to ask is this: Do you believe in true love?

Your answer to that question should (in my opinion) dictate your thoughts on the actual number of fishies in that big blue thing.

First, what exactly is true love? Simple. True love is the thought that there is exactly one person in the entire world that you’re meant to love. This is where we get somewhat sappy phrases like “I was meant for you,” and “You’re my only one.” It’s an easy enough concept to grasp; for every one person, there is one – and only one – love companion…

….and for some reason, this image of carrots comes up on Google when you search the term “love companions.”

First, we’ll say that you do not believe in true love. That is, you think that it’s possible to, in the true sense of the word, love more than one person during your entire life span.

For you non-believers, the sea is in fact extremely large and polluted with fish. There are plenty of fish in the sea. 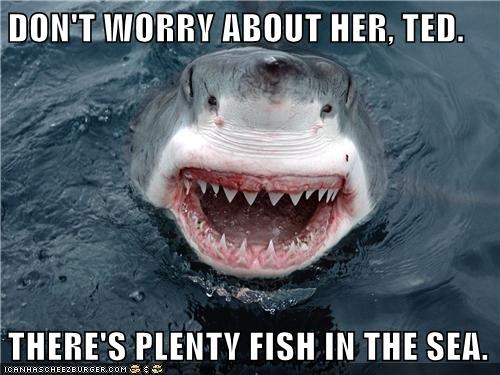 Makes sense, right? You aren’t restricted in a way that only allows you to really love one person. You can fish for someone else. Bait another hook. Take a swim in the great blue beyond. Sample the sushi bar. There are a lot of fish swimming around, and if you lose one that you like (love), well, that’s no biggie. Plenty more to be had. The phrase in question should comfort you if you’ve lost your love companion (your human love companion, not your carrot one). You can brush it off, get back on your feet, and give the love thing another whirl.

Now for the other side. Let’s say you do believe in true love. You have a one and only. There’s exactly one person out there for you.

As you may have guessed, the phrase, “There are plenty of fish in the sea” shouldn’t mean shit to you. Because really, there’s only one fish that matters…

For you believers, there aren’t plenty of fish in the sea. Well, technically, I guess there are. When we say “the sea” we really mean the earth, and when we say “fish” we really mean people. There’s no denying that there are plenty of people on the earth, and therefore “plenty of fish in the sea.” But, nearly all of those fish aren’t really fish. They’re gefilte fish.

Don’t know what gefilte fish is? Gefilte fish is like a meld of a couple of different types of fish that are ground up and shaped into whatever shape you want it to look like. The clammy hand below is kindly displaying an example of gefilte fish.

It’s not dinosaur poo, I swear

I know, it doesn’t look or sound particularly appetizing. But that’s not my point.

If you believe in true love, which, if you haven’t guessed, is the camp in which I reside, then you, too, should believe that there are plenty of gefilte fish swimming in the sea. Like I said, gefilte fish are real, but they aren’t exactly what you’re looking for. You want a fish that’s totally, completely, real and pure. You don’t want some thrown together, piecemeal type of thing. You want the real deal.  It’s very possible that you may have caught a gefilte fish once before, and it may have seemed ok for a little while. But, after some time, you realized that it wasn’t real. It wasn’t the fish you were looking for. It’s not your one and only. So you “throw it back” and try again.

Apologies, but for those of you who claim to believe in true love, there are not plenty of fish in the sea. Really, it’s just a lot of gefilte fish.

So, what do you think? Are there plenty of real fish in the sea, or is it just a bunch of gefilte fish? I’d love to hear your thoughts as I don’t fancy myself an expert on the matter. Please feel free to comment in the little comment box below.